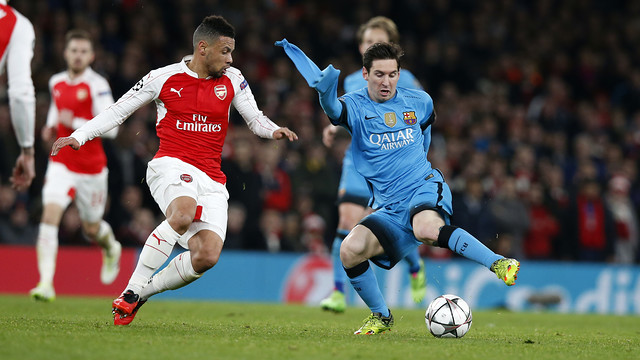 Thomas Vermaelen has urged Barcelona not to underestimate his former Arsenal team-mates when the sides conclude their Champions League last-16 tie at Camp Nou on Wednesday.

Holders Barca secured a 2-0 advantage during the closing stages of a keenly contested match at Emirates Stadium three weeks ago, with Lionel Messi netting a late brace.

Luis Enrique’s men are chasing their 10th consecutive home win in Europe’s premier competition but, despite the fact Arsenal appear to be on course to once again miss out on a quarter-final berth they were last able to claim in 2010, Vermaelen is taking nothing for granted.

“It won’t be an easy game at all,” the Belgium defender, who swapped north London for Catalonia in August 2014, told Barcelona’s official website.

“Although we have a small lead, you can never say that they are out. They have very quick players and that makes them dangerous. We’ll need to concentrate.

“It is two different team [who are] very similar in the way they play. They look to play a passing game and keep the ball on the ground. They don’t go for long balls.

“It would be incredible to win [the Champions League] again but there’s still a long way to go. There are lots of games left and we’ll have to work hard if we want to do it.”

While Barca are sitting pretty at the top of La Liga, Arsenal’s Premier League title challenge has floundered on the back of three winless outings.

The pressure on long-serving manager Arsene Wenger was further increased by a shock FA Cup quarter-final defeat to Watford on Sunday.

Per Mertesacker underlined the fine margins Arsenal must hit on Tuesday – bemoaning a tension that undermined their work against Watford before warning that there is no margin for error at Camp Nou.

“We were not relaxed against Watford. Even in the box we played and always found good positions, with the man in the right position but we lacked that relaxation even to hit the target,” the centre-back told his club’s official website. “We did not do that sometimes. We missed it too often.

“We cannot afford to concede against Barcelona. We have to go there and try to attack, no matter what, that is the only possibility we have. We can be fortunate to have such big game in front of us.

“They are the ultimate team at the minute, so we are straight away under pressure and we have to go away from home. I think the confidence is there, we are just missing something.

“The season is not over. We play in a confident way, we maybe lack that bit at the end. The desire to play together and to be good as a team is there, you can feel that.”

The task for Mertesacker and his defensive colleagues will be made more difficult by Luis Suarez’s expected return to the Barcelona starting line-up – the Uruguay striker having rested as his colleagues routed Getafe 6-0 on Saturday.

Danny Welbeck and Theo Walcott provide options for Wenger to bolster his attack with pace in search of the goals required, the former having come off the bench to net a late consolation as Watford held on for a 2-1 win.

Paris Saint-Germain midfielder Marco Verratti has warned his team-mates to be on their guard for Diego Costa’s “warfare” when they visit Chelsea in the second leg of their Champions League last-16 tie.

For the third season in succession, the reigning Ligue 1 and Premier League champions have been paired together in the knockout rounds, with each side claiming a slender away goals aggregate triumph apiece so far.

Similarly, the latest tie is finely poised – PSG holding a 2-1 advantage thanks to goals from Zlatan Ibrahimovic and Edinson Cavani either side of John Obi Mikel’s equaliser at the Parc des Princes.

Chelsea boss Guus Hiddink is set to recall Costa to lead the attack after the striker sat out Saturday’s 1-1 Premier League draw against Stoke City due to a tendon problem.

Italy international Verratti professes admiration for Cesc Fabregas although he also admits a grudging respect for Costa’s uncompromising playing style, through which on-field confrontations with opponents are seemingly inevitable.

“I prefer entertaining football, but having a personality like Costa in your team is always good,” Verratti told the Guardian.

“He uses warfare to win the games, but I know him, he’s a good guy who transforms when he comes on the pitch.

“If I was to pick a player that I identify with in this Chelsea team it would be Cesc Fabregas. He makes you see what the game is about, he breathes football and you can tell by his way of playing how much he loves it.”

Verratti was not overly satisfied with PSG’s performance in the opening leg and is keen to avoid the “disaster” of elimination at Stamford Bridge.

“We confirmed we are a good team, but there are things we could have done better,” he said. “We could have put Chelsea in more trouble. We have to go to London and play our football, if we do anything else we’ll be in trouble.

“We need to keep the possession of the ball, attack and go for an early goal. These are the games that we wait for all season. Being eliminated in the Champions League would be a bit of a disaster.”

Verratti hopes to shake off lingering issues with a groin complaint to face Chelsea, with fellow midfielder Blaise Matuidi battling to overcome a thigh injury after Angel Di Maria returned to action for Saturday’s goalless draw against Montpellier.

Willian has starred for Chelsea in this season’s competition with five goals in seven appearances.

The Brazil winger was one of few players to emerge with any credit from Chelsea’s woeful start to their Premier League defence and, following a collective upturn since Hiddink replaced Jose Mourinho, he wants to reward the veteran tactician with silverware.

“We always have pressure to win titles at Chelsea and we know that,” he told the club’s official website. “We have to stay concentrated on this game.

“I hope we can give Guus a title. It would be great for us and for him so we will try our best to do that.”

Chelsea are set to be without captain John Terry once more, with the centre-back still troubled by a hamstring injury that has ruled him out of the past five matches. Former Barcelona winger Pedro could return from a similar complaint to boost Hiddink’s attacking options. Miralem Pjanic has ambitiously called for Roma to produce the “perfect” performance as they look to overturn a 2-0 deficit to Real Madrid in the last 16 of the Champions League.

In-form Roma have won seven straight Serie A games, their only defeat since late January coming in this tie’s first leg on home soil.

The Serie A side now face a daunting trip to the Santiago Bernabeu on Tuesday, where Madrid have won 28 of their last 33 Champions League games and have not suffered defeat by two clear goals since a 2-0 reverse to Barcelona in the 2010-11 semi-finals.

Regardless, Pjanic remains bullish over Roma’s chances, his confidence boosted by the capital club’s significant upturn in form since Luciano Spalletti replaced Rudi Garcia in the Roma dugout.

“This is the true Roma,” midfielder Pjanic told Roma Radio. “We will go to Madrid and try to put in a perfect performance.

“We know that it will be difficult but we will do our best nonetheless. Obviously we tried to score at least one goal during the first leg, although things were complicated and we will now try to complete a perfect match and hurt them whenever we can.

“I am feeling great along with the rest of the team. I like playing like this but that is obvious.

“Physically we are all fine and everyone knows what they must do on the field. We always have a team-mate free to which we can pass the ball and this demonstrates our confidence on the field.”

Madrid come into the contest in ominous form of their own, responding to last weekend’s derby defeat to Atletico Madrid by beating Levante 3-1 in midweek and then thrashing Celta Vigo 7-1 at the Bernabeu.

Cristiano Ronaldo – who opened the scoring in the first leg in Rome – netted four times against the Galician side, moving to second on the all-time Liga scoring charts, behind only great rival Lionel Messi.

With Karim Benzema still injured, the attacking burden will once again fall on the Portugal captain, although Gareth Bale returned from a calf injury with a goal from the bench against Celta and may get a start in continental action.