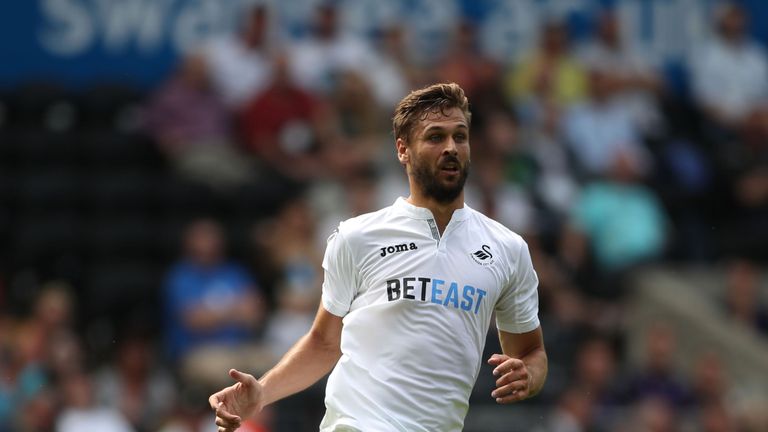 Record signing Borja Baston will have to wait for his Swansea debut as he sits out the Premier League opener at Burnley on Saturday.

Borja completed a club record £15.5m move from Atletico Madrid on Thursday, but Swansea manager Francesco Guidolin will not integrate the 23-year-old Spaniard into his squad until next week.

Burnley will be hoping to kick off their third Premier League campaign with victory at Turf Moor, as Sean Dyche’s side attempt to avoid relegation from the top flight for the first time since 1975.

Jon Flanagan will not be able to make his Burnley debut at Turf Moor. The Liverpool loanee barely featured in pre-season for his parent club prior to his switch and Dyche wants to see his conditioning improve before he thrusts him into action.

One full-back who may feature is Stephen Ward (hamstring) though striker Ashley Barnes, who is suffering from a similar problem, is unlikely to play in a game which could see Icelander Johann Berg Gudmundsson make his senior bow.

With Borja not in the squad, fellow new signing Fernando Llorente is set to lead the line for Swansea following his recent arrival.

Gylfi Sigurdsson will be among the substitutes for Swansea even though he has only just returned to training following Iceland’s summer exploits, while Wales defender Neil Taylor is not included as he builds up fitness after his post-Euro 2016 break.

Swansea have won four of their last five league meetings with Burnley (W4 D0 L1), including two 1-0 wins over Burnley in the 2014-15 Premier League season.

This will be the ninth occasion in the last 10 seasons that Swansea have opened their league campaign away from home.

There have been 21 goals scored in Swansea’s five previous Premier League matches on the opening weekend, an average of 4.2 per game.

Swansea are unbeaten in their last seven Premier League games played in the month of August (W5 D2 L0).